Who Is Anansa Sims? Untold Facts About Plus-Size Model 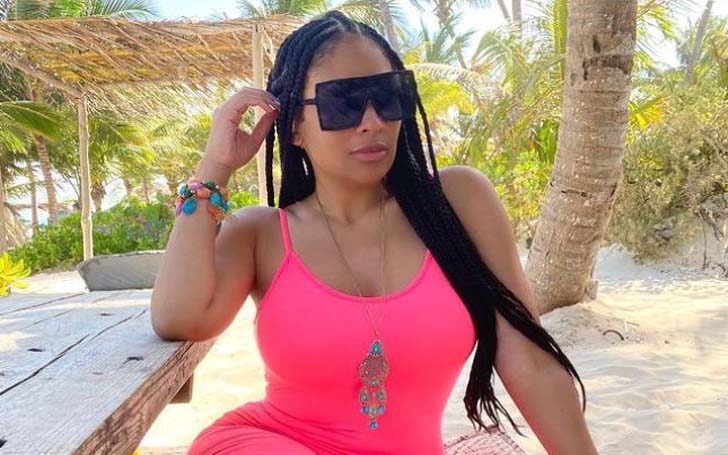 Anansa Sims is a renowned American plus-size supermodel,  TV personality, host, motivational speaker, designer, and actress. Anansa Sims rose to prominence after her appearance in  America’s Next Top Model, The Mo’Nique Show, and The Wendy Williams Show. Anansa Sims serves in the plus size division of Wilhelmina and was among the models who posed nude for the Glamorous US.

The American's Next Top Model is also well known as the ex-wife of former footballer David Patterson. She is the daughter of a veteran supermodel, Beverly Johnson and Danny Sims. Anansa's father, Danny sims is a well-known singer. She is also engaged in using her notoriety to be a healthy role model for young women.

Belonging to a celebrity family, she caught the attention since her birth. But very little is known about this plus size model, let's discover who she was before gaining fame and also cover more unknown information about Anansa Sims in this article.

Anansa Sims Early Life: She Is the Daughter Of a Popular Model & Record Producer

Anansa Sims was born to her celebrity parents, Beverly Johnson and Danny Sims on December 27, 1978, in New York City, New York. Sims is a devout Christian and belongs to a mixed ethical race. She is of  American nationality.

Danny Sims, Anansa's father served as a record producer, distributor, and promoter. He is most recognized for signing Bob Marley, one of the pioneers of reggae music, to his first global distribution and recording deals.

Anansa's father lost his life to cancer at the age of 75. Anansa's producer father had his last breath on October 3 in Los Angeles. Danny sims are also believed to be in the army where he played football for the team that toured Europe.

Now, talking about her mother, Beverly Ann Johnson is indeed a model, actor, singer, and entrepreneur from the United States. Beverly Johnson rose to prominence in August 1974, when she emerged as the first African-American model to adorn the cover of American Vogue.

Also Read: Who Is David Visentin? Know Everything About Co-Host Of Love It Or List It

Anansa Sims Drop Her Education To Work As A Model

Anansa Sims's supermodel mom didn't want her daughter to join the industry though she was from the same industry. After completing high school, she enrolled on college. Later, she realized she want to pursue her career in modelling and hence drop her study.

But, later the daughter of late Mr Sims completed her bachelor's and MBA and even work as a financial an. analyst. Again, after completing her graduation and post-graduation, she returned to the showbiz world and work as a plus-size model. Anansa Sims is currently associated with the likes of Wilhelmina Models LA.

Anansa Sim's mom who was against her daughter joining the industry later supported her plus-size model daughter.

Also Read: Who Is Weslie Fowler? Unknown Facts About The Daughter Of Allison Holker

Sims privately spent most of her sophomore year at Buffalo State College starving herself and working out four times a day to lose weight. Anansa Sims Lost more than 40 pounds to be a model, she then moved to new york and signed up with a major agency. But she couldn't make it as they asked Sims to shed another 10 pounds.

More starving, more workouts, and the addition of pills landed her an appointment with a top photographer. Sims, on the other hand, fell in the elevator on the morning of the big day.

Sims then returned to school and regained about 20 pounds. She subsequently sought plus-size modelling jobs and discover Wilhelmina Models had a division. Anansa was contacted and was hired. They assured her she was great the way she was.

Anansa Was Married To David Patterson & Had Three Children With Him

Patterson and Sims divorced in 2017, and that was heartbreaking. Sims and Patterson, according to reports, filed a divorce application in the San Bernardino County High Court on May 11, 2017, and finalized it the same year.

Anansa after divorce from David Patterson, Anansa dated Matt Barnes. Anansa and Matt Barnes had known each other before dating. their relationship years later in 2017.

In December 2018, Anansa and Barnes were blessed with son Ashton Joseph Barnes.

In 2018, The American's Next Top Model and 2002 NBA Draftee split but their break-up news flashes in 2020 when Anansa changed her relationship status to single on Instagram. Soon after their separation, the two hurled accusations of stalking and hostility at one another. They also battled for custody of their son, Aston Barnes.

Barnes was charged with being obsessive and harassing Sims via text and social media. She stated that she organized for their kid to see Barnes during vacation, but the bullying continued, so she applied for a protection order.

Sims' mother, legendary supermodel Beverly Johnson, Barnes claimed, was provoking her daughter. Nevertheless, following months of social media battling, the two apologized and reconnected. During the Easter 2020 holiday, Sims and Barnes posted pictures on social media of their happy family reconnecting for the first time since their separation.

Sim's current love partner even posted an apology in a video for the way he behave on social media following their divorce and also claimed their relationship is going to after the reunion.

Anansa despite being a top plus-size model has kept her net worth secret. While her beau Matt Barnes has a net worth of $10 Million.

Q. Who Is Anansa Sims & When was She Born?

Anansa Sims is a top plus-size model, and Tv personality and was born on s on December 27, 1978, in New York City, New York.

Q. Who is Anansa Sims Parents?

Q. How is David Patterson related to Anansa Sims?

David Patterson is the ex-husband of Anansa Sims

Q. How many Kids does Anansa Sims Have?

Anansa Sims is the mother of 4 kids. She shares three kids with her ex-husband David Patterson and one with Matt Brans