Angelina Dimova: Know About Her Journey From Tennis Player To Social Media Star 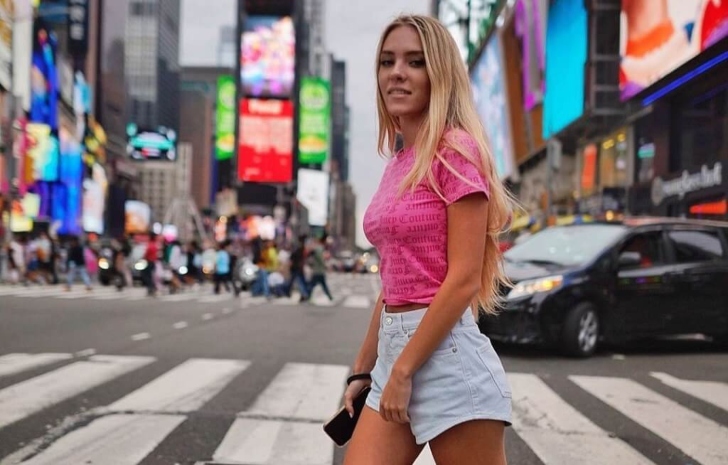 Angelina Dimova is Ukraine-born American Model, Youtuber, Fitness expert, social media influencer and Junior Tennis Player. She rose to prominence after being part of the ITF Juniors Tour. But now she is a social media sensation and is popular for his social media appearance rather than her skill on the tennis court.

Taking About her social media engagement, she is most popular on Instagram, her follower count read 464k. She is fond of cars and hence she keeps promoting various brands of cars. She is also a model and hence keeps floating her well-maintained body on Instagram to engage her followers. Apart from Instagram, she has 1 million followers on TikTok as well and has almost 10 million likes.

The talk of the town is Angelina Dimova, but who is she and where did she come from? Let's take a closer look at their personal lives as well as her rise to fame on social media. Let's get started.

But there is no information on whether he shifted alone or shifted along with her family. She resides in Miami, USA. Angelina is tight-tipped about revealing her family detail. She holds the nationality of America and belongs of Caucasian descent.

While not much has been revealed by Angelina Dimova related to her family. She mentions she has an older brother who is a fitness trainer. However, it took six years for the brother and sister to finally meet after Angelina emigrated to the United States and her brother remained in his native Ukraine and other parts of Eastern Europe.

Angelina's Brother in one of his sister's YouTube videos mentioned, faced many problems while trying to enter the states. He failed to get the visa on multiple occasions and because of this reason he have to live around he lived around Barcelona, London, Dubai, and Tijuana before finally being able to enter the US.

He, however, spent a considerable amount of time in Mexico before ultimately reconnecting with his sister. He also had to wait around and go through the immigration process there, which was unpleasant.

Angelina Dimova sustained an injury in which she broke her Collarbone. In a YouTube Video of her titled "How To Come To The USA without a visa and how much does it cost?" She mentioned that a few weeks prior, she had broken her collarbone. She noted that because of her fracture, she only travelled when it was necessary.

She sustained an injury after falling off from a skateboard, which she revealed in her YouTube Video.

On explaining how she broke her shoulder, She Stated:

"I believed in myself very much because I already rode it very well. I thought I had mastered it but during acceleration, I leaned forward and my skateboard got stuck on asphalt. After that, inertia threw me off of my board and I ended up shattering my collarbone,"

Angelina Dimova Was A Tennis Player

Before starting her career as a YouTuber and social media sensation, Dimova competed for her native Ukraine as a junior tennis player in the ITF. Dimova began playing junior tennis in May 2012, competing in the Nashi Dity Cup up until round 32, where she was defeated by Yuliya Kizelbasheva of Russia.

In the same year, she also competed in the Kravchenko Cup and Wilson Cup U12 but unfortunately, she failed to reach the round of 16 in both tournaments.  In 2013, Angelina participated in around 7 competitions. She didn't get enough success as a Tennis player. Her best was when she qualified for the semi-final in Azores Open 12 and under and other being Nov GD Tennis Cup U12 where she finished in the Top 4.

Similarly, she participated in almost a dozen of competitions in 2014 but she didn't cross the hurdle of the Top 8 on every occasion. Angelina participated in over 12 tennis tournaments in 2015. Her best performance that year was making it to the May Antei Cup semifinals when she lost the championship match to fellow Ukrainian Viktoriya Pertenk in the last four.

In 2016, she played the last professional tennis competition in her motherland. After that, Angelina made her US debut by competing in the Plantation, Florida JA Platinum/Orange Bowl International Tennis Championship. The blond model advanced to the final eight competitors. Ultimately, this might turn out to be Angelina's final match in a professional tennis match.

She Didn't Feature In Ranking

Though Angelina played many regional competitions, she left Tennis before becoming a pro and that kept her far from gaining WTA Ranking.

Going by Angelina Dimova's Instagram post, one can conclude she is single at the moment. Over the years, all her post on social media is about herself and her love for cars. The 21-year model has posted nothing that can flash her relationship status.

In opposition to Russia's current invasion of Ukraine, Dimova and her brother have both been rather outspoken. The sister and brother have discussed Russia's unwarranted invasion of their native nation many times.

Angelina Dimova's Net Worth In 2022

Given the extravagant cars Dimova flaunts on her social media, it might be difficult to classify the former tennis player turned model from Ukraine as anything less than a star with an average level of wealth and popularity.

Angelina is 21 years old and she has earned pretty well at a such young age. She has earned a decent amount from her modelling career while the major source of her income comes from YouTube and Instagram. Her net worth is estimated between $1- $5 Million.