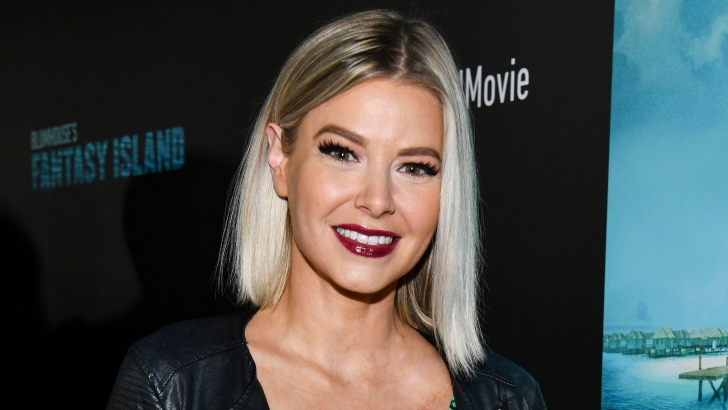 Ariana Madix is an American actress and author best known for her appearance in the Bravo television series Vanderpump Rules. Her other notable roles are in films Working It Out, Killer Eye: Halloween Haunt, Dirty Dealing 3D, Dead End and Attack of the 50 Foot Cheerleader. She has been in a romantic relationship with her fellow Vanderpump Rules star Tom Sandoval who previously dated his co-star Kristen Doute.

Ariana Madix was born on June 24, 1985, in Melbourne, Florida, the United States, to father James Madix and mother Tanya Karr Madix. She was raised by her parents along with her younger brother Jeremy Madix who was born in 1992.

Madix is of American nationality and belongs to the white ethnicity. She has green eyes and her hair color is blond. She stands at a height of 5 feet 5 inches.

Ariana Madix initially appeared in comedy videos of the CollegeHumor website. She then guest-appeared on numerous television shows such as Dads, Anger Management, Waking Up with Strangers and Single Siblings. In 2010, Madix got a chance to star in her debut film Working It Out. She has since appeared in a number of movies including Killer Eye: Halloween Haunt, Attack of the 50 Foot Cheerleader, Dirty Dealing 3D and Dead End.

She was working at Lisa Vanderpump's SUR and Villa Blanca restaurants when she was offered to appear on Vanderpump Rules. She starred in the reality television series in 2013 alongside her boyfriend Tom Sandoval. In 2019, she portrayed herself in the episode "Chase Shoots a Music Video" of the MTV comedy series The Other Two.

Madix and Sandoval are the authors of the cocktail book titled Fancy AF Cocktails: Drink Recipes from a Couple of Professional Drinkers that they published on December 3, 2019.

As we mentioned earlier, Ariana Madix has been in a romantic relationship with her Vanderpump Rules co-star Tom Sandoval. The couple fell in love while on the show and eventually started dating. Sandoval told Us Weekly in December 2021 that he and Madex were having affair secretly for a while before they made their relationship official.

Prior to his relationship with Madix, Sandoval was dating his fellow Vanderpump Rules star Kristen Doute. The formal couple started dating in 2013 but just a year later in 2014, he broke up with his now ex-girlfriend.

Estimated Net Worth of $4 Million

According to Celebrity Net Worth, Ariana Madix has an estimated net worth of $1 million, as of 2022. It is said that a Vanderpump Rules cast was only getting paid $5,000 per episode of its first season.

In April 2020, Madix and Sandoval settled into a beautiful five-bedroom and a five-and-a-half-bathroom house in Los Angeles. It took them an entire year to furnish their home. The house has a massive swimming pool.