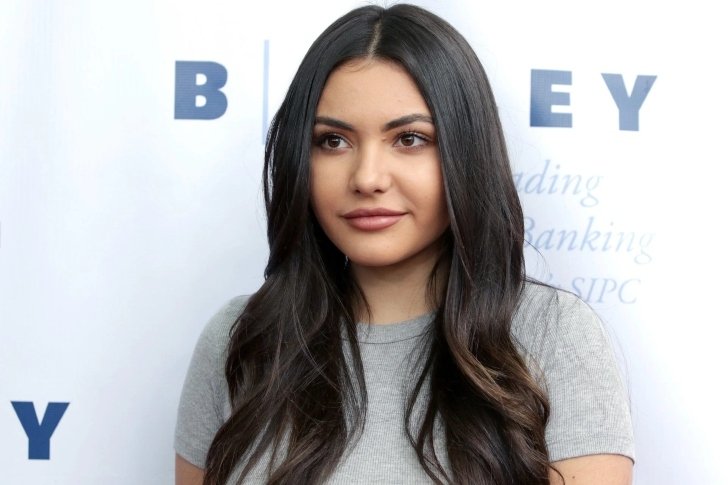 Gaining notoriety for oneself through the help of famous parents is not a recent trend. And same goes with Atiana De La Hoya, who gain fame since her birth as the daughter of  Oscar De La Hoya and Shanna Moakler.

Atiana herself is a model, artist, Television personality and social media star. She is a rising social media celebrity with over 583k followers on Instagram.

Despite all this, she is still widely known because of her famous parents. Her father Oscar De La Hoya is a former boxer known for his achievement in the ring and the controversies both in the ring and off the ring.

And her mother is also a well-known personality, a former Miss USA and also a well-recognized model and television star.

Apart from being the daughter of famous personalities, there is yet more to know about Atiana. Let's explore the personal and professional life of Atiana in detail.

On March 29, 1999, Atiana Cecilia De La Hoya was born in Los Angeles, California. She goes by the name Ati.

Her mother was a former model and Television celebrity. Her Mother Moakler is a former Miss USA and also known for featuring in Playboy Playmate magazine.

Her father is a legendary boxer who has several accolades under his name.

Also Read: Who Is Tony Berlin? Know More About The Husband Of Harris Faulkner

Her parents were engaged in 1998 but things didn't go well and they quit in 2000. Just a year after Atiana's birth. Atiana is raised by her mother after the separation from her father. Atiana is currently living with her mother.

The relationship between Step-father and step-daughter was good and they bonded very well. Atiana's stepfather, Travis and the biological father have also maintained a mutual relationship with each other.

Atiana's Half-Siblings: Her Seven Half Siblings

Atiana has seven half-siblings from her parent's different relationships. She has one elder brother Jacob De La Hoya born from his father Oscar's affair with Toni Alvarado.

The upcoming star and model, Atiana has another half-brother Devon De La Hoya, he is the son of Oscar from her former wife  Angelique McQueen.

She has two more half-siblings,  Landon and Alabama Luella Barker, both were born through her mother’s relationship with her ex-husband, Travis Barker.

Her father has other children with another of his partners. With his last ex-wife, Millie Corretjer, he has three children: Oscar Gabriel, Lauren Nanette, and Victoria Lauren.

Atiana started her career at a very young age. The daughter of the legendary boxer was seen on Travis Barker and Shana Moakler’s show Meet the Barkers between 2005 and 2006 when she was just 7 years old.

Atiana do start modelling at 14 but later left it to focus on her study.

Atiana went to viewpoint school. In June 2017, She graduated from Sierra Canyon School, a high school in the Los Angeles area of Chatsworth.

After completing high school, she return to what she wanted to do and now does modelling for LA Models and MGM Models.

Also Read: Who Is Trey Gowdy’s Wife Terri Gowdy? Does Her Family Receive A Death Threat?

Her first ever cover magazine was released in June 2021, in the month Atiana was successful to have her first cover story with Galore.

It's just the beginning of her career and there is no doubt that many more to come for her modelling career.

Atiana Is Also Fond Of Art

Despite being the daughter of famous personalities, Atiana is also known for her talent. Not only in modelling and acting, but Atiana also has skills in other fields as well.

Atiana has also made a name for herself as an artist, hand-painting designer bags and launching her line of personalized pieces.

She stated that Art by Ati happened purely by chance. Moakler's daughter worked at a business in Los Angeles and doodled these characters on sticky notes.

The daughter of Oscar De La Hoya, Atiana confessed her interest in art and movies and aspires to do more of it in the future.

Atiana is a cute and beautiful model with a stunning figure and can woo many. But she has not revealed anything about her relationship status.

Whether she had any relationship earlier or with whom she is dating currently is unknown. And hence one can conclude she is single at the moment. We hope she gets her dream partner very soon.

Atiana has just started her career after completing her study and her salary for her modelling is unknown. So, Atiana's net worth is still underestimation.

But her father Oscar De La Hoya is one of the richest athletes of that time and has a net worth of a whopping $200 million. He once earned $700 million in pay-per-view revenue, making him the greatest pay-per-view earner. However, this record was broken by Mayweather Jr. and Manny Pacquiao in May 2015.