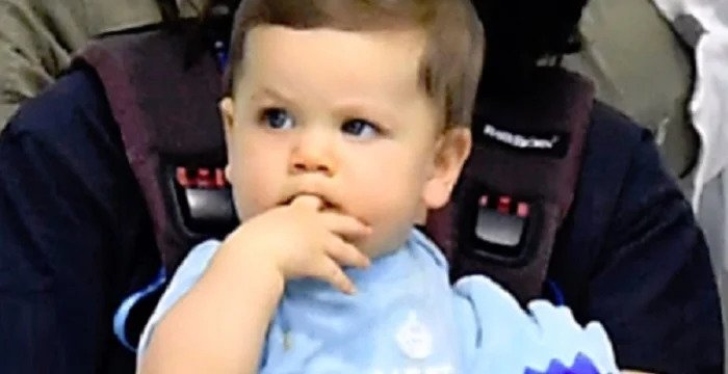 Dimitri Portwood is the youngest child of the well-known celebrity  Ashton Kutcher and Mila Kunis. Dimitri Portwood rose to prominence as the celebrity kid of very successful parents. Both his parents are award-winning actors.

Dimitri's father is a model, actor and a very successful entrepreneur while his mother is a big star in the town. Dimitri's father, Ashton Kutcher is a winner of people choice awards while his mother, Mila Kunis Marcello Mastroianni Award. Dimitri is gifted with such a famous parent. But, Dimitri's parents are equally as stringent when it comes to their children's privacy as many celebrity couples.

His parents tried to keep him out of the media attention, so many don't know much about Dimitri Portwood Kutcher. To know about Dimitri's aspect and some fascinating information about him. Stay connected with us.

Dimitri Kutcher is the only son of his parents, he was born on 30th November 2016 in Los Angeles, California. His birth was announced 2 days later via his father Kutcher’s website A Plus. His father is of Czech, German, and Irish ancestry, and his mother is of Ukrainian and Russian origin. He is also of mixed ethnicity and has an American Nationality.

He is an easy child unlike his sister Wyatt Isabelle Kutcher who seeks attention from her parents, as stated by their parents. Dimitri is still a toddler but as confirmed by his mother, he will go to Russian Preschool. Both his child has to learn the Russian language.

Also Read: Who Was Sawyer Sweeten? Know The Reason Behind His Suicide

The media and public always seem interested in researching more about the celebrity kid. His name caught everyone's eyeball as it was unique.

Dimitri's father, Ashton Kutcher while talking in an interview, revealed the interesting story behind naming his son. As the mascot of his alma mater, the University of Iowa, Ashton originally intended to name his newly born baby "Hawkeye".

But Ashton's wife Mila Kunis came up with an alternative name, Dimitri. Ashton Kutcher too liked the name. The name Dimitri has a special meaning in Russian culture, it means "Followers of Demeter" and refers to the Greek god of farming and fertility. Moreover, His first name recalls the Ukrainian and Russian ancestry of his mother while his second name pays tribute to Ashton's stepfather, Mark Portwood.

Dimitri got exposure as the star kid, both his father and mother is highly successful personality in their respective field.

Talking about his mother, Mila Kunis is a successful Hollywood actress, Mila Kunis started her career with daily soap in 1994 with the opera "broadcast Days of Our Lives". She gained popularity after getting a big break from the movie "Forgetting Sarah Marshall". Since then Mila Kunis has been part of several successful movies. Her other most recognized performance was in "Black Swan" for which she also got a Golden Globe Award nomination

While his father, Ashton Kutcher is an actor, model and now a successful entrepreneur. He is also co-founder of A-Grade Investments, the venture capital firm.

Dimitri's parents first meeting was on the set of ‘That ‘70s Show, they separated their way and both were determined to make their careers. They shared a great bond from the time of the "That ‘70s Show".

Their friendship & bond were so good, that Ashton even helped Mila to complete her assignment. They both started dating but the twist in the tale is they dated different partners.

Ashton married an American Actress Demi Moore in 2005 and their relationship ended in 2012, while Mila dated Macaulay Culkin. Even rumours of Mila and Macaulay's marriage were spread. Ashton and his ex-wife divorced in 2013. After divorce, Ashton dated Mila Kunis.

After dating for two years, Mila Kunis and Ashton Kutcher married in July 2015. Their private wedding ceremony was held at The Secret Garden at Parrish Ranch in Oak Glen, California. Since then, they are happily married and living happily with their kids.

They welcomed their first baby, Wyatt Isabelle, born in October 2014. Dimitri was their second child. Dimitri Kutcher and his sister Wyatt Isabelle share a great bond, Wyatt is a loving sister to his brother.

“Wyatt thinks [Dimitri] is her baby, and at some point, I’m going to have to explain to her it’s not really her baby. I don’t know how I’m going to do that. She loves the baby so much … maybe more than me.”

Mila Kunis, the mother of them said on The Ellen DeGeneres Show.

Dimitri Kutcher's father Ashton Kutcher is going through serious health complications for a while. He is suffering from an autoimmune disease called vasculitis that affects the sense of hearing, walking, and seeing.

Despite consulting many top doctors and visiting the best hospital, doctors failed to diagnose the type of Vasculitis Ashton Kutcher is dealing with.

Mila Kunis's Celebrity husband, Ashton Kutcher lost his sense a couple of years ago. But with the continuous efforts from the doctors, Ashton regains some of his senses now. Ashton Kutcher and his family are together coping with this disease and trying their best to overcome it. For the same, Ashton Kutcher has to visit the doctor regularly.

Kutcher even expressed gratitude for his life at one point on an episode of Running Wild with Bear Grylls. Thanks to his family, who supported him through his difficult period.

Dimitri Portwood Kutcher is just 5 years old as of now. With his parents and sister, he is currently a resident of the Beverly Hills Post Office neighbourhood. Dimitri spends the first few years of his childhood in the Beverly Hills, Los Angeles, home his parents have since sold.