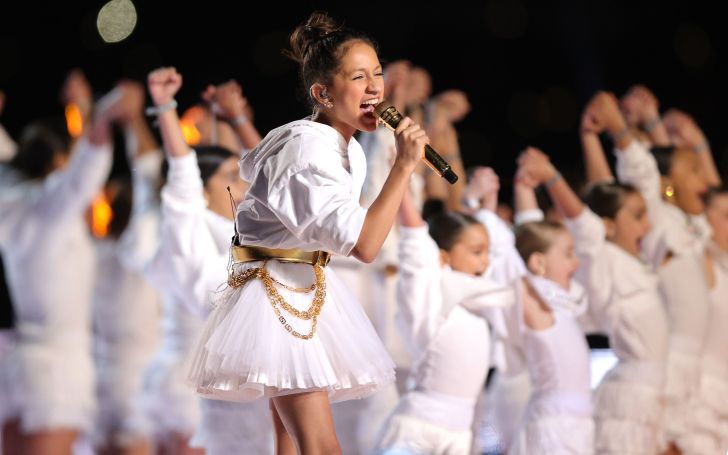 Emme Maribel Muñiz is a celebrity child who rose to prominence as one of the twin children of Jennifer Lopez and Marc Anthony, a former American singer, actor and producer couple.

Jennifer Lopez's daughter has already featured alongside her on a stage where Jennifer performs with Shakira and Bad Bunny. Emme, a replica of her mom, is already making headlines with her singing talents.

She is a twin with her brother Maximilian David Muñiz, who is a minute younger than her sister. The twins' parents are well-known figures in the entertainment sector. Jennifer Lopez and Marc Anthony are both legendary singers.

Along with singing, Emme is fond of writing as well. Her father, Marc, is a renowned singer with three Grammy awards, and her mother, Jennifer, is a leading actress and singer in Hollywood with multiple accolades.

How has a celebrity child's life been? Is she following in her parents' footsteps? What kind of book did she write?

Emme Early Life And History Behind Her Name

The couple, too, arranged a baby shower in New York on January 19.

She is of Puerto Rican ancestry as both of his parents are of the same ethnicity, and She has American nationality.

Incident Behind The Name

After a week, the couple named their kids. Maximilian and Emme's middle names are David and Maribel, respectively.

Not much is known about her education detail, but she is still in her teen, and from this, it can be said she is a school-going, kid. She is reported to study in a local Miami, Florida school.

Her parents, now separated by the divorce, attended Emme's track event at her school.

Her mother was seen with her current boyfriend, Alex Rodriguez, While her father, Marc, attended the event with his girlfriend.

Emme Maribel Muniz has one twin brother And Other Half Siblings.

Maximilian, Emme's biological brother, is a twin. Emme is born exactly one minute after Maximilian. It was initially claimed that it was 11 minutes later.

'People' paid $6,000,000 for the first photographs of Maximilian and Emme. Celebrity photographer Tony Duran took the images throughout a weekend at the couple's Long Island home.

She has three half-siblings and one adopted sibling, all of whom are from his father's prior relationships and his twin brother.

Arianna Muniz is the eldest daughter of Grammy winner Marc Muniz. She was born in 1994, following his romance with Debbie Rosado. They also adopted a child named Chase Muniz.

Emme's mom Jennifer is a renowned singer and leading actress in Hollywood. Not only by look Emme resemblance her mom but also by vocal talent.

Lopez not only performed with Sakira and Bad Bunny during the Super Bowl halftime show in 2020, but she was also accompanied on stage by her daughter Emme. This was the first sign that Emme followed in her parents' footsteps.

Emme won the hearts of many fans even though she had a brief appearance. But despite doing just a cameo, she took overall control of the stage and showed her vocal talent to the audience.

She not only sang her mother's song in one breath, but she also set the entire stage on fire with her performance of Bruce Springsteen.

Furthermore, She also appeared as a vocalist in her mother's film, Second Act. She appears in the film's music video, Limitless, alongside only her mom Jennifer Lopez.

Emme's brother is showing his singing talent. In September 2019, Jennifer released a video of Max performing Vance Joy's "Riptide" while his sister Emme performed the guitar. Lopez also posted a photo of her son from a recording session in May 2020.

Marc and Jennifer were dating in the late 1990s, shortly after Marc divorced his first wife, Dayanara. Jennifer and Marc married in June 2004.

But, because things were not going well, they divorced in 2011, just seven years after their marriage. Jennifer Lopez filed for divorce in 2012, and the couple divorced in 2014.

Jennifer Raising Her Child As A Pride Mother

It's not easy to raise a child as a single mother, but the star singer and famous actresses do it easily.

In an Interview, Jennifer, with tears in her eyes, burst out about being the mother of twins and stated,

"They made my life so much better. I'm forever grateful for that. You know, I didn't have kids until later and so I almost thought that it wasn't going to happen for me, so I'm very aware that I was blessed with that. It could have been something different."

I take each day as it comes. The kids and I are like gipsies. We travel all over the place, just getting it done and doing our best.

Emme is a school-age child who is not active in any job other than her occasional appearances in stage shows with her mother. Her pay is still unaccounted for.

His parents are both wealthy. His father, Marc, is projected to be worth $80 million, while his actress mother, Jennifer, is estimated to be worth $150 million as of 2022.