Who Is Isha Price? Unknown Facts About Serena Williams' Sister 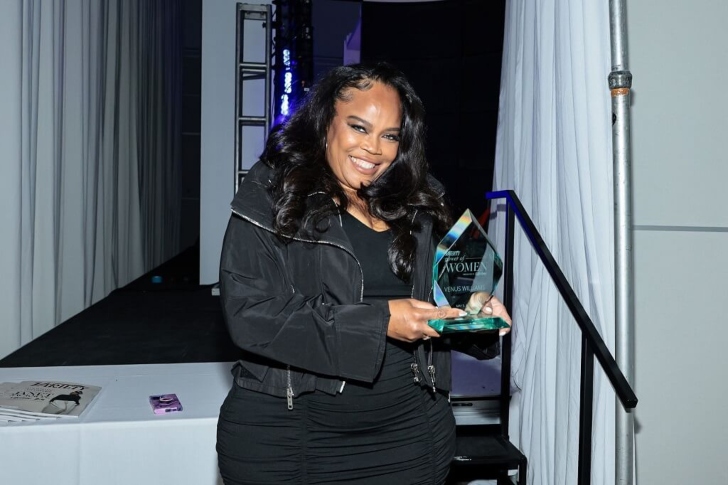 Despite being a successful entrepreneur, Isha Price is also known by her parents, Oracene Price, and the late Yusef Rasheed. Isha Price's mother married American Tennis coach Richard Williams after the death of her Father Yusef Rasheed. Richard and Williams is the father of Isha Price half sisters Venus and Serena Williams.

Isha Price was born to her tennis coach's mother, Oracene Price and her late husband Yusef Rasheed on 18 February 1975 in Beverly Hills, California. Isha Price's current age is 47. Isha was born with the star sign Aquarius and belongs to American-African descent and holds American nationality.

Isha Price's mother is a well-known tennis coach. While Isha Price's father Yusef Rasheed died just 4 years later after her birth in 1979 due to a sudden stroke. Isha was raised by her mom and stepfather, Richard Williams, with whom Isha's mom  Oracene Price tied the knot following the death of her father.

And then went to Howard University where the daughter of a tennis coach completed her Master of Business Administration (MBA).

Siblings of Isha Price: She is a Half-Sister of Serena & Venus Williams

Isha grew up along with five siblings. Isha has two biological sisters from her mother's relationship with their late father Yusef Rasheed. Isha's elder sister Yetunde Price was born on August 9, 1972. Yetunde Price is also the first daughter of Oracene Price. The salon owner's sister of Isha Price was murdered on 2003 September 14. Yetunde was also a registered nurse.

Isha is the second daughter of her parents and has a younger sister Lyndrea Price born in 1978. She is a web developer and a fashion merchandiser.

Venus and Serena Williams need no introduction, they are the world top class tennis player. Both of Isha's half-sisters are on the list of the top 10 greatest women Tennis players of all time list.

Both of Williams' sisters have won uncountable awards and trophies including a gold medal in Olympics. Both are Olympics gold medalists.

Playing 14 seasons of world team tennis, Venus Williams has won n seven Grand Slam singles titles. Venus is also the first Afro-American woman to earn the tag of world no.1 and to win the title in the Open Era. Talking about another half-sister of Isha, Serena has won 23 Grand Slam titles in the Open Era.

Williams' sister had made everyone proud but behind their success, there is the hard work of their mother and father who themselves trained their daughter.

Their Family Came Into The Limelight After The Movie King Richard

An American biographical sports drama film titled King Richard was released on September 2, 2021. The movie brought the Williams-Price family to the limelight.

The movie was based on Isha's stepsisters Venus and Serena Williams's successful journey. How their parents, father Richard Williams and mother Oracene Price trained their daughter to make them world top tennis players.

Talking about the casting, Will Smith played the role of Richard Williams and for his brilliant effort in the movie, Will Smith received appreciation as well as awards like Academy, BAFTA and critics choice Awards.

Isha Price Had Tough Upbringing: She Grew Up in Strict Parenting Of Her StepFather

Isha was just 4 years old when her father Yusef Rasheed died of a stroke. Following the death of her father, her mother tied the knot with Richard Williams in 1980.

Isha was then raised by her stepfather, Richard Williams who was not just a strict coach but also a strict father. Richard Williams had a very tight schedule for her daughters, they had a bedtime of 10 pm. While Talking with The New York Times, she revealed the tough time she had while growing up,

“It wasn’t until I got to college that I realized that our lives weren’t what other people considered normal.”

Isha Price has an early interest in investing in documentaries and she invested in a few documentaries as well. She started her career as a lawyer. As per the LinkedIn profile, Serena Williams' half-sister is the owner of Price Consulting Group in Clinton, Maryland. Isha Price is also the co-founder of Wishbone Consulting Group. Isha is the office's Senior Strategic Advisor.

At Wishbone, Isha collaborates with co-founder Jenny Goldstock to develop the company's strategy for its clients. Isha also brings an unusual combination of inside knowledge and strong talents in branding and business to Wishbone's distinct clientele base.

Is Isha Price Married? Who Is Her Husband?

Isha Price is in a marital relationship with her long-term boyfriend Felix Fayron. There is nothing revealed about their romantic affair and when they tied the knot. However, it is believed that the romantic duo dated a couple of years before exchanging the Vows.

Isha Price's spouse Felix Fayron shares the same profession as Isha. He is also a lawyer by profession. Isha and her lawyer husband live in very low-profile love, the duo has not even shared any details regarding their children.

The step-sister of Venus and Serena is a successful Entrepreneur and has accumulated a good fortune from her professional career. Isha Price has an estimated net worth of $2 million.

Q. When and Where was Isha Price born?

Isha Price was born on 18 February 1975 in Beverly Hills, California.

Q. Who are Isha Price's parents? How did her father die?

Q. Who is the stepfather of Isha Price?

A well-known American Tennis coach Richard Williams is the stepfather of Isha Price.

Q. Who is the step-sister of Isha Price?

Venus Williams and Serena Williams are the stepsisters of Isha Price

Q. What is the name of Isha Price's Husband?

Q. What is the net worth of Isha Price?

Isha Price has an estimated net worth of $2 million to date.