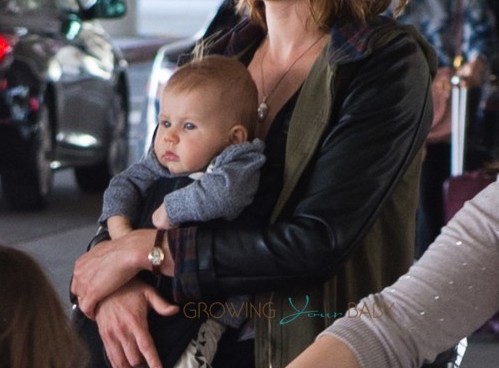 The second child of Cobie Smulders and Taran Killam, Janita Mae Killam was born in January of 2015. Although both the parents keep their children’s lives away from the public domain, the news of Janita’s birth was accidentally given away by Cobie herself.

At the Sundance Film Festival where she was promoting her movie ‘Unexpected’ just three weeks after he had given birth to Janita, the Canadian actress revealed that she had been blessed with another princess.

Actress Cobie Smulders of ‘How I Met Your Mother’ fame, expresses in almost all of recent her interviews that her biggest priorities are her two daughters, and wants to spend as much time with them as possible.

This is also the reason why she only picks those movies that she is really interested in considering she has to spend a lot of time away from them.

Being a celebrity kid, Janita Mae Killam lives a life many young children her age can only dream of. Her elder sister Shaelyn is as much a celebrity as her parents and gets clicked by paparazzi whenever she is seen outdoors.

The Story Behind Her Name ‘Janita Mae’:

‘Janita’ as a name has origins in Hebrew and Spanish meaning, ‘God is gracious’. The name ‘Mae’ has connections with the month of May, which is tied to Maia, the Roman goddess of growth and motherhood.

These names seem perfect for the little angel considering her mother Cobie’s battle with ovarian cancer.

In 2007, Cobie Smulders was diagnosed with ovarian cancer and it was a critical case because cancer had spread to Lymph nodes by the time she found about about the disease. She had to be operated on several times and the procedures left her with only a third of her ovaries. Doctors reported that her chances of a natural conception and safe pregnancy were ‘slim to none.

But against all odds, baby Shaelyn was born in 2009 and in 2015, Janita Mae came into her parents’ life in the form of a second miracle. That’s why the name is perfect for the little one.

Many know Cobie Smulders as Robin Scherbatsky from the popular sitcom ‘How I Met Your Mother’ for which she was paid a good $225,000 per episode. She is from Canada and has earned fame in America as a model and actress. ‘The Avengers’ actress has an estimated net worth of $2 million.

Janita’s dad, Taran Killam is an American actor and comedian. He has appeared and written for popular shows like ‘The Amanda Show’, ‘Wild n Out’, ‘Mad Tv’ among others. ‘The Saturday Night Live’ actor, has an estimated net worth of $4 million and has been a part of few movies too.

Taran and Cobie have been together for a very long time, almost two decades in fact. The couple got engaged in 2009 after dating for seven years.

Their first daughter, Shaelyn was born after their engagement. They finally tied the knot on 8th September 2012 in Solvang, California. And three years later in 2015, they welcomed Janita Mae Killam, their second child.

Shaelyn Cado Killam was born in New York, on the 16th of May, 2009, and perhaps has been in the limelight ever since. One of the cutest celebrity kids, fans go crazy to get a glimpse of the cutie and know what she is up to.

Her name ‘Shaelyn’ means noble and ‘Cado’ means little fighter. She truly is a noble little fighter given the circumstances she was born in.

The couple, Taran and Cobie emphasize giving their children a simple life away from the spotlight for as long as possible. But that seems too far-fetched for stars of their stature as fans are curious about everything related to them.

But to give credit where it’s due, Shaelyn was photographed much more as a child which the stars have been able to control with Juanita.

There are rarely any pictures of her floating on the internet. But that doesn’t mean they don’t go on exotic vacations and occasional outings. Surely, most of their wishes get fulfilled, if not all!