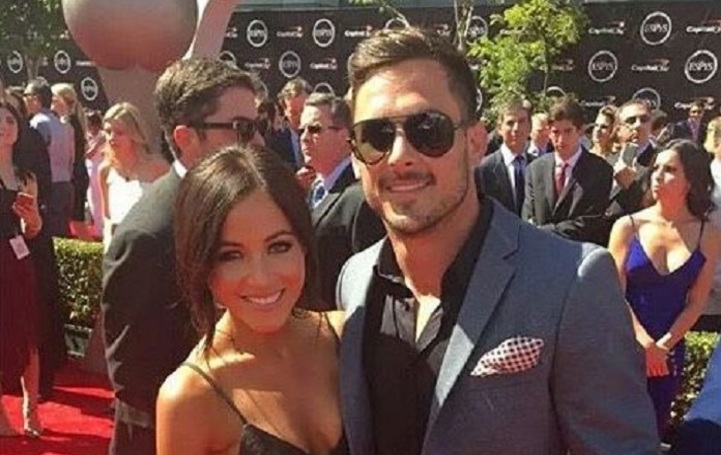 Kay Adam is a famous sportscaster of Goodmorning football from NFL Network was rumored dating Danny Amendola who is a famous football player.

Their relationship rumor aroused when they went to watch the Super Bowl together.

There is more information on their relationship below for you to find so keep scrolling!

In 2015 Adam and Danny appeared in ESPY Awards together, form there rumors of them dating started. Soon after when Adams posted one of the pictures with Amendola while watching Super Bowl 2015, it escalated the rumor furthermore.

Apparently, there are also rumors that they broke up after a year. Although, the rumors were never confirmed. The rumors of their relationship came to an end in 2016 because Danny Amendelo started to date Olivia Culpo.

Who is kay Adams dating now?

Kay Adam isn’t so much open about her relationship as her career is keeping her from dating. Though sometimes in past she has tweeted hinting she had a player boyfriend but nothing more known about those tweets.

On her guest appearance as The Late Late Show with Craig Ferguson back in 2012, Adams talked about her personal life regarding her dating status. She said being a reporter in the sports field most men were intimidated by her personality. So, because of her career, she couldn’t find a partner.

For now, the relationship of Adam is not clear to the media. Hopefully, she will someday announce her relationship and we will know more.

Danny Amendola's past and present relationship

Daniel Amendola aka Danny is currently in a relationship with Jean Watts, who is a singer born on 18 Feb 1993. They were first seen together in February 2020 in Miami Beach.

In 2013 Amendola dated Taylor Reazin who was a model. They kept their relationship secret.

In 2016 he then dated Olivia Culpo. They broke up In 2018 after too much drama. Then in 2019 Amendelo was spotted with Instagram Influencer Emily Tanner on their beach date.

VIsit  Glamourbreak to know more about your Fav Celeb.