Home celeb-kids Who Is Michaiah Hanks? Everything About Chet Hanks' Daughter

Who Is Michaiah Hanks? Everything About Chet Hanks' Daughter 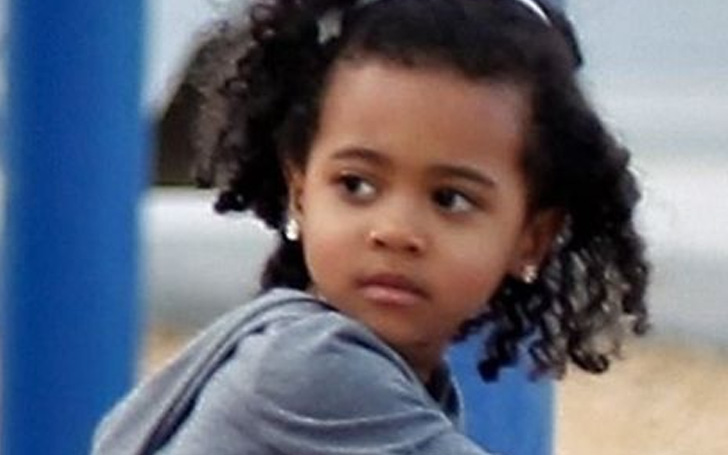 Chet Hanks didn't expected a baby from her girlfriend Tiffany but when Tiffany was pregnant, Chet Hanks accepted the responsibility and considered the birth of her daughter Michaiah as the best thing that ever happened to him.

Michaiah belongs to a star-studded family, her grandfather Tom Hanks is a veteran actor. The celebrity star kids become the centre of attraction since their birth, and people and the media want to know more about them. So here we are trying to explore unknown facts about Michaiah Hanks. Stay connected with us to know about Michaiah's parents, birth detail, her net worth and more.

Michaiah Hanks was born on 16th April 2016, in Los Angeles. She is born to Chet Hanks and Tiffany Miles. The celebrity child is of American Nationality.

Her father's side of the family gives her Greek, Bulgarian, Portuguese, and English ancestry. Michaiah is of African American descent from his mother. Her mother is a native of Indio, California. She is of American-African ethnicity.

Michaiah Hanks’ Parents Were Never In A Relationship

Yes, Michaiah Hanks' parents are not married and neither they were in any kind of relationship. It is believed that Tom Hanks' son, Chet Hanks and Tiffany Miles had a one-night stand when Chet was drunk. In that due course, Tiffany became pregnant.

Neither of them was expecting a baby as they were not in relationships but Chet Hanks accepted the responsibility and also confesses the mother of his daughter is the loveliest person he has yet to meet.

Chet Hanks Supported His Daughter's Mother During A Protest

Amid the George Floyd protest, Chet Hanks, the father of Michaiah Hanks and the son of veteran actor Tom Hanks, paid a heartwarming tribute to his daughter’s black mom, Miles. Chet wrote about how grateful he was for Tiffany, referring to her as "the mother of my child and a beautiful black woman," along with an Instagram picture of him in front of Geroge Floyd's artwork.

Also Read: Who Was Sawyer Sweeten? Know The Reason Behind His Suicide

"I want to share something today because it’s about to be shared anyway in the press, which is the fact that I have a daughter. I do have a daughter, she’s the best thing that’s ever happened to me, she’s the reason why I turned my life around and got sober.”

At the time, Chet also disclosed that he had been free of all substances for more than a year and a half, he also claimed his daughter has changed his life. The video was later deleted.

Michaiah is blessed with fame since her birth. She is the celebrity kid born to famous father Chet Hanks who is further the son of veteran actor Tom Hanks. Michaiah's Father, Chet Hanks has not yet achieved the enormous fame that his father has throughout the years.

Michaiah Hanks' father, Chet Hanks is an actor who is known for his recurring roles in famous series like Empire and Shameless. Chet was also part of the Showtime legal drama miniseries "Your Honor" where he played the role of  Joey Maldini. He is credited for movies likes "Bratz, Indiana Jones and the Kingdom of the Crystal Skull, Larry Crowne, Project X, Fantastic Four, and Greyhound".

Along with being an actor, he is also a rapper, he recorded the remix version of Wiz Khalifa's song Black and yellow titled “White and Purple” under the alias Chet Haze in 2011.

Chet formed a musical duo with FTRZ with Drew Arthur in 2016. The duo released their first two singles "Models” and “NowhereLand” along with "Ocean Park EP" in 2018. Later, Under the new moniker Something Out West, the duo released two tunes in 2020: "Harley" and "Ticket Out My Head."

Michaiah Hank's Mother: Her Mother Is a Journalist

She assists with handling Twitter, YouTube, and email accounts. Her additional responsibilities include running the teleprompter during live shoots, processing paperwork, and setting up equipment for red carpet appearances.

She is the granddaughter of Tom Hanks, her grandfather needs no introduction. He is a legendary actor and is regarded as an American cultural icon. Tom Hanks is the fourth highest grossing actor in north America as his movie has grossed a whopping $4.9 billion in North America and more than $9.96 billion worldwide.

Michaiah's Grandfather Tom Hanks is known for his legendary performance in Splash, Bachelor Party, Big, and A League of Their Own, The Forrest Gump, Phillipadeia and more. He won two best actor academy awards, one for Phillipadeia in 1993 and the other for The Forrest Gump in 1994. His Oscar-winning movie The Forrest Gump was recently remade in Bollywood as "Laal Singh Chadda" starring Superstar Aamir Khan.

Michaiah’s Relationship With The Hanks Family

Michaiah is very well received in Hanks' family, everyone love her.

“They (the Hanks) have fallen in love with the little girl. They adore that baby and even spent Halloween with her. She will always be loved and taken care of by the Hanks family.”

This was reported by an insider. Rita Wilson and Tom Hanks discussed how wonderful grandparents they are to their grandchildren, including Michaiah. Rita stated in an interview,

Michaiah's Father Chet Hanks is the son of Tom Hanks. Despite being from a star family and having a lavish upbringing, he was involved in drug abuse.

He first admitted to having a problem with substance abuse when he was 16 years old. He even garnered media attention in June 2015 for using the N-word improperly on Instagram. Additionally, he once demolished a hotel room, posing with guns, and spent time in rehabilitation. He was driving his parent's car when he was in a car accident in 2016, and he had just consumed drugs.  He suffered a brain injury in the accident and also legal action was taken against him by the victim Terry Morgan.

He was drunk when he had a one-night stand with Tiffany Mills and in that incident, Tiffany got pregnant and Michaiah was born. The father's responsibility helped him to become sober.

Michaiah Hanks is 6 years old kid who is enjoying her lavish upbringing offered by her parents. Michaiah Hank's father has a net worth of $3 million while his grandfather Tom Hanks has a fortune of $400 million, her grandfather charges around $25 million per movie.