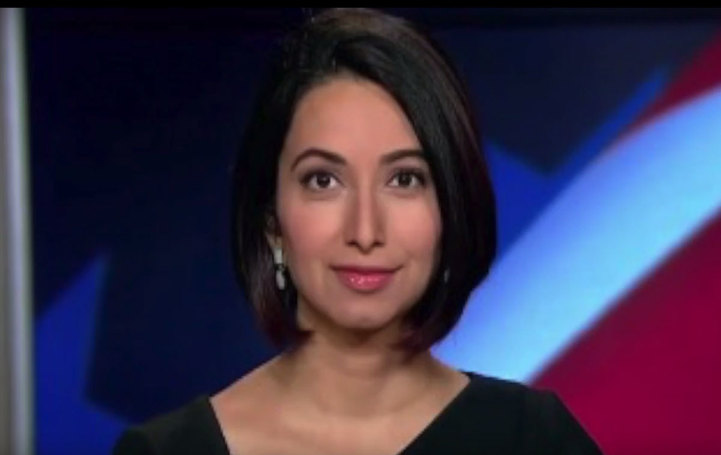 Nayyera Haq is known for her hosting, journalism, and policy advising. She has also worked for Whitehouse as Senior Director of Cabinet Affairs.

She is famous for her strong views on political affairs. Currently, she is the full-time host of BNC and also a radio host of Sirius XM Radio INC., and also is volunteering for Council in Foreign Relations.

According to her website nayyera.com her name's pronunciation is Nay-Yer-Uh.

Haq was born on 1 Oct 1981 in New York, USA. Her parents migrated from Pakistan to Staten Island and had her in America. She was able to get good quality of life and education as her both parents were working in Public services.

Her mother was a scientist in the field of physic whereas her father was a school teacher in a public school. Haq's younger brother is a Medical doctor.

Haq graduated her high school from Stuyvesant High School. Then she attended the University of Michigan for her Bachelor's degree in History. Then in 2008, she graduated with her master's degree in Law and Journalism from Georgetown University Law Center.

Nayyera Haq is happily married to an Afro-American graduate of Tuskegee University. of Alabama, in the United States who is also a native of Oakland. They have a beautiful son together named Idris, who was born on 12 Nov of 2016.

On 6 Aug 2016 for the first time, Haq posted her first photo with a baby bump. Then she posted a picture of baby Idris after 15 days of his birth with the caption "hello world". Haq often flaunts her baby boy on her Instagram. Her baby boy was born on the day Donald Trump was elected as President.

Second pregnancy and Mother's day during the pandemic.

Between the pandemic, Haq became pregnant for the second time. Form constantly working and being a primary earning parent she had become pregnant in the home.

Before the Pandemic hit Nayyera always had been a busy woman with her work because most of the works were done by her husband, that she did no longer even knows their baby schedule. While babysitting in this pandemic she had done all sorts of things like primary and secondary parenting, watching Duck Tales for an entire day.

One thing that Haq has learned on parenting from this pandemic is "parenting philosophies be damned, the only thing that matters is survival"

It was their hardest for Nayyera when her husband got covid and they all had to go to quarantine because of which mother's day was just celebrated within the family and she couldn't even get to meet her mother.

During Quarantine summer she also gave birth to her little daughter. This time their pregnancy was more personal as there were no visitors and only they were there for each other which made their parents and baby bonding stronger. Again after giving birth from C-section, she instantly wanted to connect with the rest of the world  as kids are more expensive and she needed to do more works.

Throughout this pandemic, she felt less judged by other people for being a working mom, she worked from home, and lack of socializing allowed them their own family unit. She just lets her husband look after her children and get to her work as her husband knows their children's mood better.
The once workaholic Nayerra who was only focused on her career is more focused on her kids now and believes that kids did not ask to be born or made the choice to be born. So their parents should love them all they can. That's how they can survive and thrive. And it is Nayyera's secret gift of clarity on the second pandemic Mother's Day.

Nayyera Haq's estimated net worth is around $3 million. She is one of the competitive people and has worked for many government firms.

Haq started her career in 2002 as a Media Advisor in Democratic Leader Nancy Pelosi. She worked there for two years.

From 2004-2006 she worked as Communication director for Congressman John Salazar. John Salazar was a former and Haq prepared him to be a congressman by developing a strategy to appeal to non-biased voters.

From 2006 to 2007 she worked as a national spokesperson for the Children's Defense Fund where she advised leaders on public affairs of the modern era which was related to children's literacy and healthcare for the people of color. In 2008 for less than a year she worked as Director of communication for the Obama presidential campaign.

In 2009 she became a spokesperson for the U.S. Department of the treasury where she made efforts to improve job markets, made college more affordable, and increased tax benefits for the middle-class families during the economic and financial crisis.

Then in 2014, she joined Whitehouse to Work in Cabinet Affairs as Senior Director.

Currently, she is working as a full-time host in the BNC channel where she hosts "The World Tonight" and is Chief Foreign Affairs Correspondent for BNC.

She has volunteered in Next Generation National Security Leader Fellowship from Jan2016-Dec 2017 as she was selected by the Centre for a New American Security. And since 2018 she is volunteering as a team member of the Council on Foreign Relations.