Home celebrity Who Is Oka Giner? Know More About The Five Juanas Actress

Who Is Oka Giner? Know More About The Five Juanas Actress 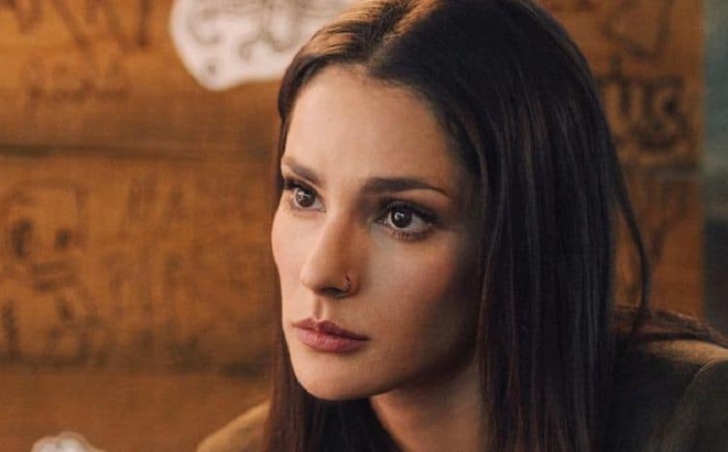 Oka Giner, originally Okairy Alejandra Giner Arredondo, is a Mexican-born model and an actress who got recognization from her very debut role.

She played the role of Bárbara Fuenmayor in the Mexican television series Gossip Girl: Acapulco, a Spanish-language American hit series. She is also trained in Polynesian dances, such as Hawaiian and Tahitian, which she learned for 11 years.

After the success of her maiden TV series, Gossip Girl, she is again emerging as the face of Mexican Television shows with her new series, The Five Juanas.

Let's have a look at her inside life, from her early days to becoming a popular face of Mexican TV and also at her personal life.

She is born to a parents Lorena Arredondo Alderete and Guillermo Giner Chavira.

. Giner displayed an early interest in acting, directing and playing in plays with her cousins during family gatherings.

She was seen participating in Beauty Pageants at a very young age and also debuted modelling at the age of 17.

She also did a photoshoot for El Diario de Chihuahua, the online newspaper, in 2010.

For 11 years she studied Polynesian dances such as Hawaiian and Tahitian. She does go to university but soon left it and auditioned for Centro de Educación Artística, which was the free drama school run by Televisa and cleared it successfully.

However, in 2012, She moved from Camargo to Mexico City to attend school. She gained acting experience when she was in Centro de Educación Artística (CEA).

During her first year of her at CEA, she heard about the audition being done for Gossip Girl: Acapulco. Oka attends the audition to gain experience for her future audition. She was the last candidate to audition but surprisingly she got cast in it. The Tv show was commercially and critically successful but goes off the air in 2014.

Giner returned to CEA in July 2013 to begin her second year of studies after completing production and promotion for Gossip Girl: Acapulco.

For 11 years, she studied Polynesian dances such as Hawaiian and Tahitian. She went to university but soon left it and auditioned for Centro de Educación Artística, the free drama school run by Televisa and cleared it successfully.

However, in 2012, She moved from Camargo to Mexico City to attend school. She gained acting experience when she was in Centro de Educación Artística (CEA).

During her first year at CEA, she heard about the audition for Gossip Girl: Acapulco. Oka attends the audition to gain experience for her future audition. She was the last candidate to audition, but surprisingly she got cast in it. The Tv show was commercially and critically successful but went off the air in 2014.

In 2013, after completing the shoot and finishing the promotion of The Gossip Girl, Oka returned to CEA to start her second year.

She again went to audtion for the lead role in the Televisa telenovela, Hasta el fin del mundo. But unfortunately, she didn't get the roles.

However, In July 2014, she was cast for a recurring role in another series Señorita Pólvora. She also acted in a short film, M de iMportante.

In 2013, Giner was announced as a new celebrity spokesmodel by "Always platinum" this was the start of her appearance in commercials for the brand in Mexico.

Also Read: Who Is Kindly Myers? Some Unknown Facts About The Gorgeous Bartender & Model

Oka Giner was then seen in Telemundo telenovela Bajo el mismo cielo, that was premierd in July 28, 2015, the first episode of which gain highest TV rating on ratings on Telemundo for a telenovela in 3 years.

Oka Giner was seen as portraying one of the leads in the Netflix series The Five Juanas. She co-star along Sofia Engberg, Juanita Arias, Juria Vega, and Renata Notni.

The first season of this series was loved by fans and fans poured love for it just after few days after its release, the series finds its place in the Top 10  most popular productions on the streaming platform.

She also did the role in Netflix 2021 series, she portrayed the role of Elena in Daughter From Another Mother/Mother There Are Only Two.

Oka Giner Relationship; Her Boyfriend Is A Comedian

Yes, the Mexican actress is in a relationship with Venezuelan comedian Nacho Redondo. Nacho asked Giner for a date out on   Instagram and the couple met each other on a blind date.

It was incredible, he wrote to me on Instagram, and I read that he was a comedian. I love going to see comedy, going to see stand-up, and I accepted a blind date,

Giner also revealed her boyfriend once asked her while proposing " I want everything or nothing from you. I can't be your friend".

Giner also claimed her boyfriend is a gentleman and understands her perfectly.

It was none other than her boyfriend Nacho who convinced Giner to be a part of Netflix’s The Five Juanas.

Giner had no interest in doing the character as she was mentally disturbed due to the covid-19 pandemic and was also in the thought of taking the break.

But her boyfriend secretly brought her the flight ticket to Mexico after a conversation in which he tried to convince her.

While Talking with Excelsior in June 2021, Giner opened up how she received troll and criticism for her Physique as people commented,

This might have hurt her at the beginning but now she doesn't care about the people's comments about her.

Ginner is a well-known actress and modelling and has appeared in dozens of TV shows.

Even if we take the lowest scale of pay, Oka may have earned anywhere from $5000 to $10,000, but with appearances in more than 100 episodes, he could have earned more than $1 million.

Apart from acting she also promotes beauty products and several other products. This also pays a good amount of money to her.

Her exact net worth is yet to be accounted but it won't be wrong to say that she is a millionaire.