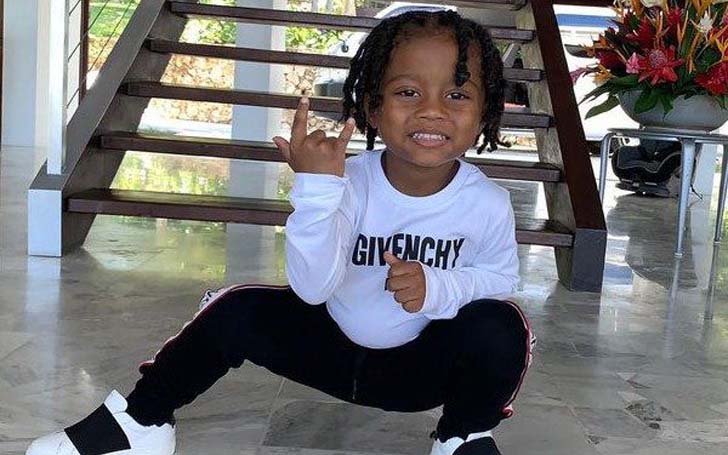 Kody Cephus born King Kody Cephus is a child of the known rapper & singer Offset and Oriel Jamie. He rose to prominence as a celebrity kid. Along with his cousins Quavo and Takeoff, Kody's father Offset is a part of the hip-hop group known as Migos.

Offset has also invested in the esports group FaZe Clan as well. Kody is gaining in the limelight since his birth and just like other celebrity kids who follow in their parent's footsteps, Kody is too showcasing intriguing talent from a very young age. Kody's Parent is separated after his birth. Kody is living with his father and enjoying his childhood days with his fathers. Kody often appears in his father's Instagram videos. Kody has also been highlighted by Offset, in Essence, Hot New Hip Hop, and the Source.

Let's find out What Kody is doing, the drama that Kody Parent's went through and also highlight the personal aspects of Kody Cephus and his family.

Kody Cephus full name King Kody Cephus was born on March 3, 2015. He was born to Oriel Jamie and Offset. His mother Oriel Jamie is a native of St. Louis, Missouri while his father Atalanta, Georgia.

Offset's ex-girlfriend and Kody's mother Oriel Jamie own and run Jamie's Studio in St. Louis, Missouri. The studio offers luxury spa services, beauty treatments like lash extensions and brow tinting, and beauty experts. The Studio also offers face waxing and is a chic and up-to-date eyebrow shaping studio. It concentrates on all-natural materials and carefully considers every step of the process.

Kody's Father Offset Is A Rapper & A Singer

Kody's father, Offset is a well-known rapper and a singer. Now talking about Offset's career, he began it in 2008, when he and his cousins Takeoff and Quavo formed the Hip Hop and Trap music group Migos. Following the release of their single "Versace," this group enjoyed huge success in 2013. They released another album, "Yung Rich Nation", in 2015 following the huge success of "Versace." In addition, their 2017 release of "Bad and Boujee" sent the internet into a frenzy and became a viral sensation.

Offset and Olier before having their son, Kody, dated for two years starting in 2013. When they chose to break up, they haven't revealed. Before he broke up with Oriel to pursue a romance with Cardi B, allegedly one of Offset's close pals thought she was the one for him.

Offset spends most of his time with his ex-girlfriend Kody, who is also King's mother, although Oriel has previously expressed concerns about the rapper's parenting. Following the announcement of Cardi B and Offset's engagement, Jamie criticized the Atlanta musician on Snapchat for failing to introduce Cardi to his son, stating

“Congrats to my son's daddy and his stepmother whom he has yet to meet. Hopefully, he at least gets an invite to the wedding.”

All the dramas that started before the birth of Kody and continued even after the separation of Offset and Oriel have to ease off currently and they share a good bond.

Kody Cephus' Siblings: He Has Three Half Siblings

Kody has three half-siblings from his father's relationship with different women. He has one elder half-brother Jordan and two younger half-sisters, Kalea Marie Cephus and Kulture Kiari Cephus.

Kody has an elder half-brother Jordan who was born from his father's Offset relationship with Justin Watson. Justin Watson sued the father of her children for child support. She alleged rapper Offset for inadequate financial support and claimed that he infrequently paid for her child's extracurricular activities, education, or medical costs. Watson requested $15,000 for legal fees in addition to retroactive child support of one year.

In response to the allegation, Kody's father admitted that while recording his album The Father of Four, he had a breakdown since it was inspired by his struggles as a father. He also confesses that he was too young for such responsibility when his first child Jordan was born. The journey of becoming a father for the first time was not easy.

Kody's younger sister Kalea Marie Cephus who is also the third child of the Offset was born from his romantic affair with Floridian rapper, Shya Lamour. However, Shya and Offset's relationship lasted just for a few months. Offset dated Shya after his break-up with Kody's mom Oriel.

Offset then dated Cardi B and with Cardi B, offset has his fourth child Kulture Kiari Cephus.

Kody Is Following In His Father’s Footsteps

Kody has appeared in his father's Instagram Videos multiple times. Also, Kody has visited his father's studio on several occasions and has tried to rhyme his word. In May 2020, Offset shared a video where his youngest son rapped,

“I’m flying with King Kody. I got beats, I’ma jump on the trampoline, I’ma do all that and, yeah/I’m ’bout to go in the building.”

Offset's son, Kody is very young and seeing his passion and talent at a such young age, it won't be wrong to say he has a great future lying ahead. Offset keeps sharing the video of his son rapping for the camera.

You fell in love with the little star because of Kody's outstanding flow on the beat. King Kody's performance of Lamb Truck in August 2021 won accolades from his Grammy award-winning stepmom Cardi B. She praised Kody's talent by remarking, "This song is becoming stuck in my mind." On Instagram, the video received over 580,000 likes and 2.6 million views.

Kody's Father Offset from the start of his career has had several bad encounters where he faces criminal charges on multiple occasions.

Offset was jailed in Georgia's DeKalb County Jail in 2013 during the promotion of his first single, Versace, for breaking the terms of his probation following previous felony burglary and theft charges.

Again, he was nabbed by police in 2015 for marijuana possession, possession of a handgun in a school safety zone, and possession of an undisclosed Schedule II drug. Furthermore, Kody's father also engaged in rioting, violence, and driving while his license was suspended. He was also taken into custody for concealing a weapon.

Kody's too young to have a net worth of his own. But he is enjoying the lavish upbringing offered by his father. His Father’s Offset, net worth is $18 Million while his stepmother Cardi B has a net worth of $10 Million as of 2022.